Man, did I miss out! Okay. Not really. But, I was slightly delayed in my love for the series.

I was able to watch 92 episodes within a month. Now, I know that's not a crazy, marathon-Mad-Men watching extravaganza. Crazy would be 92 episodes in like three days.

But for me and my schedule (kids, work, more work, house, dog, watching the series when my husband isn't home) this is like superwoman speed.

A few things I observed:

1. There's a reason why I sell vintage. It's incredible. And when the whole set is set in decade-appropriate everything, it's almost too much to take in for a vintager like myself (who happens to favor the 60s). Holy Wow. 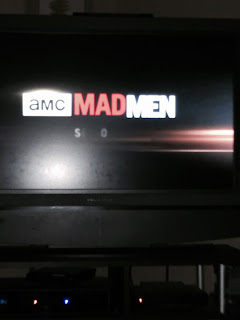 2. You would think this series is about Don Draper (actor John Hamm- AMAZING actor.) It's not. I know, I know. He is the main protagonist. You love him, then hate him, then love him again. But no. This series is really about Peggy Olson (Elisabeth Moss, INCREDIBLE actress!)

Think of it this way: You know how the story Peter Pan is about Peter Pan? Okay. Yeah. The title says it all, right? I mean Wendy, the boys, the Lost Boys, and Captain Hook. But Peter Pan isn't really about Peter. It's about Wendy. It's about her love, fears, and everything in between.

Think of Mad Men in the same vein. It could've been called Don Draper. It should have, really. And Peggy is truly central to the story. Yes, it's about Don's life and the demons he battles, but it's also and mostly about Peggy: her loves, fears ... and everything else in between.

3. They drink a lot. Like, a lot a lot. They all should have had liver failure and died by episode 23.

4. They smoke a lot. Like, a lot a lot. So much that by the end of the series, it seemed fitting that I take up this ghastly habit. But I didn't. And you shouldn't. Just don't. It's gross and it'll kill you. Leave that well enough of alone and instead do some deep-breathing without a cigarette in your mouth.

5. Character Joan Harris (Christian Hendricks- HOLY MOLY is she amazing) is the bomb. Well, she's a bombshell and the bomb. I loved her hair. I loved her wardrobe the best. I loved her one-liners. Heck. I loved her bosom, too! She's an incredible character. 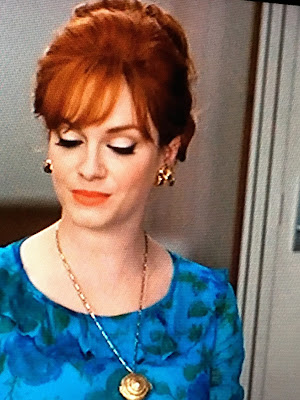 6. This little bag I sold via my Etsy shop to Season Four of Mad Men! It's too bad I didn't see it in the show, though. Perhaps they decided it didn't go well enough with Joan's dress. Regardless, I was stoked to sell something to the series! 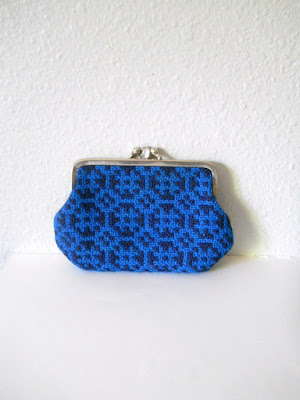 7. The lives of these people aren't lives I would ever want to live. It's sad. I mean, people loved the show! Went crazy for it. And perhaps, it's that so many people identify with struggling with "life issues," and love watching amazing characters and incredible sets and wardrobes. I understand that. But, it more or less depressed me. Don Draper had about fifty thousand chances to make his life right.

I still love the series for the theme, despite my few criticisms. I'd recommend it, too. But be prepared to ponder the show after you watch a few episodes. It makes you think!

By the way, I drink from -- almost every morning -- this 60s Fireking cup. Imagine my delight when I saw the same cup (ABC logo) on the television? 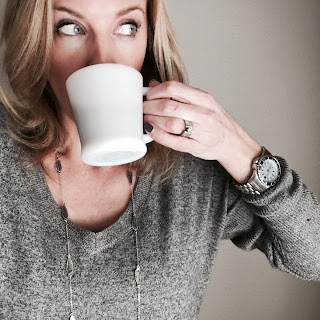 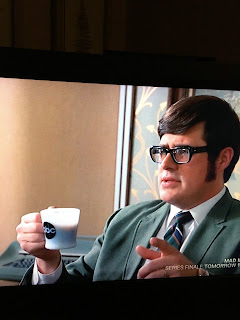